Why both Warfarin AND aspirin?


Amy said:
This is a high-flow valve, and you’re on Warfarin... and no one generally takes aspirin.
Click to expand...

Seems an odd thing to say. To say that no one generally takes aspirin is clearly untrue.

pellicle said:
That can be an issue.
Has it helped?
Click to expand...

Taking 81mg asa reduces your chance of thrombosis by 40% more than with just warfarin by itself. Valve manufacturer recommends it. Don’t know why your cardiotron doesn’t , would be interesting to see if he got his covid19 shots. He sounds like an idiot.

Location
near Fort Worth TX

Amy, you are looking for a cardiologist who will agree with your surgeon about taking aspirin. Not everyone needs to take aspirin, and some cardiologists put all patients on it; others weigh factors before advising patients to take it.

I've had 5 cardiologists in the last 18 years. I have been with my current cardiologist for 8 years.
One of my previous cardiologists advised that I take 81mg aspirin in addition to warfarin. I did. I started bruising badly. I am in range (2.5-3.5, on 5mg warfarin) about 90% of the time and have not really bruised much in the 18 years 3 months I've been on warfarin.
My next cardio looked at my medical records and asked why was I taking aspirin. I didn't really know, other than the previous doctor said he puts all his patients on 81mg aspirin. The new doctor said he could not see any reason to take it, based on my labs. So I stopped.
In 2013, following an emergency hospitalization, I changed cardiologists. I liked the one I had been seeing, but he was not on the staff at my hospital of choice, so I switched to one who was. That doctor is now chief of cardiology and chief of medical staff at that hospital and also is head of the internal medicine department at a medical school.
He has told me that I do not need aspirin. Neither of my parents had strokes. My labs and echoes (including one on carotids) are fine.
My husband had MV repair in 2007. None of our cardiologists have ever recommended aspirin for him. He is on Savaysa for a-fib. He has Alzheimer's now. He has calcification of the ascending aorta and I told our cardio no surgery and he agreed; general anesthesia escalates dementia and there is no point in fixing his heart only to rapidly worsen the dementia and/or prolong his years of dementia.

If I were anemic, I'd be asking about tests to determine why.
R

Amy said:
What kind of ‘stroke-like symptoms’
Click to expand...

Very brief, maybe 5-10 seconds during which my legs felt heavy and difficult to move, my feet dropped and kind of flopped on the floor when I took a step, and some blurry vision. Once it passed, I felt completely normal with no lingering symptoms.
C

catwoman said:
He has told me that I do not need aspirin. Neither of my parents had strokes.
Click to expand...

Hi Catwoman.
in that this was your cardiologist’s reasoning, did both of your parents also have prosthetic valves? Was he comparing apples to apples?

Amy said:
This is already the fifth cardiologist I’ve tried in as many months. None of them really seem to give a ****. Or seems to know what they’re even doing. It’s... disheartening, to say it in a nice way..... but that’s just the way it is. I don’t know how to find a decent one. I’ve tried letting my surgeon recommended one, going by internet reviews, letting the clinic’s secretary recommend the one with ‘good bedside manner’, having a PCP refer me..... it’s a complete joke, this searching for a good cardiologist and not finding one.
Click to expand...

I'm in the same boat. I absolutely HATE my current cardio Dr & his office/practice is the worst medical establishment I have ever had to deal with.

Amy said:
I just re-listened to our conversation and he said:

“Let’s stop the aspirin. You’ve been far out from the surgery. I don’t think that’s beneficial. This is a high-flow valve, and you’re on Warfarin... and no one generally takes aspirin. Your heart function is normal. This would be very unlikely for somebody young like you, and kind of otherwise okay, to be on that much of the blood-thinning..... (and) taking the aspirin could be contributing to.. the anemia.”

As a side note, I found out I was anemic even before the surgery, so even without the aspirin I’d probably still be. (That’s one of the many things I wish they’d told me pre-op - to have blood work done and get on iron supplements or whatever for a month or two to better prepare your body. If I’d done that, I wouldn’t have needed a transfusion before they started surgery.)
Click to expand...

Wow, you saying "I just re-listened to our conversation" suggests that you recorded it! What a wonderful idea.

If I could play back, or had recordings, of some of my medical encounters, that would be wonderful. And ammo for multiple lawsuits or "disbarrments" (if such a thing is possible in the medical world).

My former cardiologist objected to my even taking notes! And most Drs I encounter do not like to be questioned in any way, shape or form, regardless of how intelligent the Q might be or how it relates to my being able to make an informed decision on my treatment moving fwd. I can't imagine any Dr consenting to being recorded - that is too risky for them should they spout misinformed b.s. and especially the ones who don't give a damn and engage in treating patients like 3 year olds....like many I have had the misfortune to encounter...

slipkid said:
My former cardiologist objected to my even taking notes!
Click to expand...

Interesting, when I asked my guy (so that I could share it with my wife who wasn't able to be there) he was fine with it.

i am not on low dose aspirin.
it was never on my medication list after surgery

Critter said:
Taking 81mg asa reduces your chance of thrombosis by 40% more than with just warfarin by itself. Valve manufacturer recommends it.
Click to expand...

If you have any evidence for that statement, in the form of an academic paper, or otherwise, I’d love to have it;

And thank you for your commiseration. Yes. He was an idiot. I didn’t even mention here the worst, most condescending things he said and did in my appointment.

pekster11 said:
i am not on low dose aspirin.
it was never on my medication list after surgery
Click to expand...

But you have a mechanical valve & are on warfarin?...

catwoman said:
Not everyone needs to take aspirin,
Click to expand...

Thank you for sharing your experience and thoughts.

I can understand that. What I’m trying to find out, as per the title of my post, is WHY one would need it; & if it is not advised, WHY that’s the case, and whether not taking aspirin would then increase one’s risk of say, thrombosis, while decreasing risk of bruising; and is that trade off worth it, etc.

I have had issues with bruising and bloody noses, but I didn’t mention that to the doctor and he didn’t say that’s why he wanted me to stop the aspirin. Even if I had and he did, I’d still want to make sure I wasn’t going to be more likely to have a stroke just to get rid of the bruises.
P

Amy said:
But you have a mechanical valve & are on warfarin?...
Click to expand...

Yes, I have a mechanical valve and use warfarin
M

pellicle said:
what do you expect they'd be missing?

These are not standard tests.
Specialized tests will reveal everything but that is time.
You know they will do blood cell counts, INR, glucose, cholesterol, urea....when they take blood. They are not doing vaccine antibody tests, if they did they would find out what you are missing.

Hmmm... @Chuck C , as you kindly posted, the 2014 guidelines seem to say aspirin should be taken along with warfarin for a mechanical valve, but the 2020 version is more vague and says individual decisions should be made based on each case. Am I reading that right? Wtf does that mean? ‘Trust your a**hole doctor’? 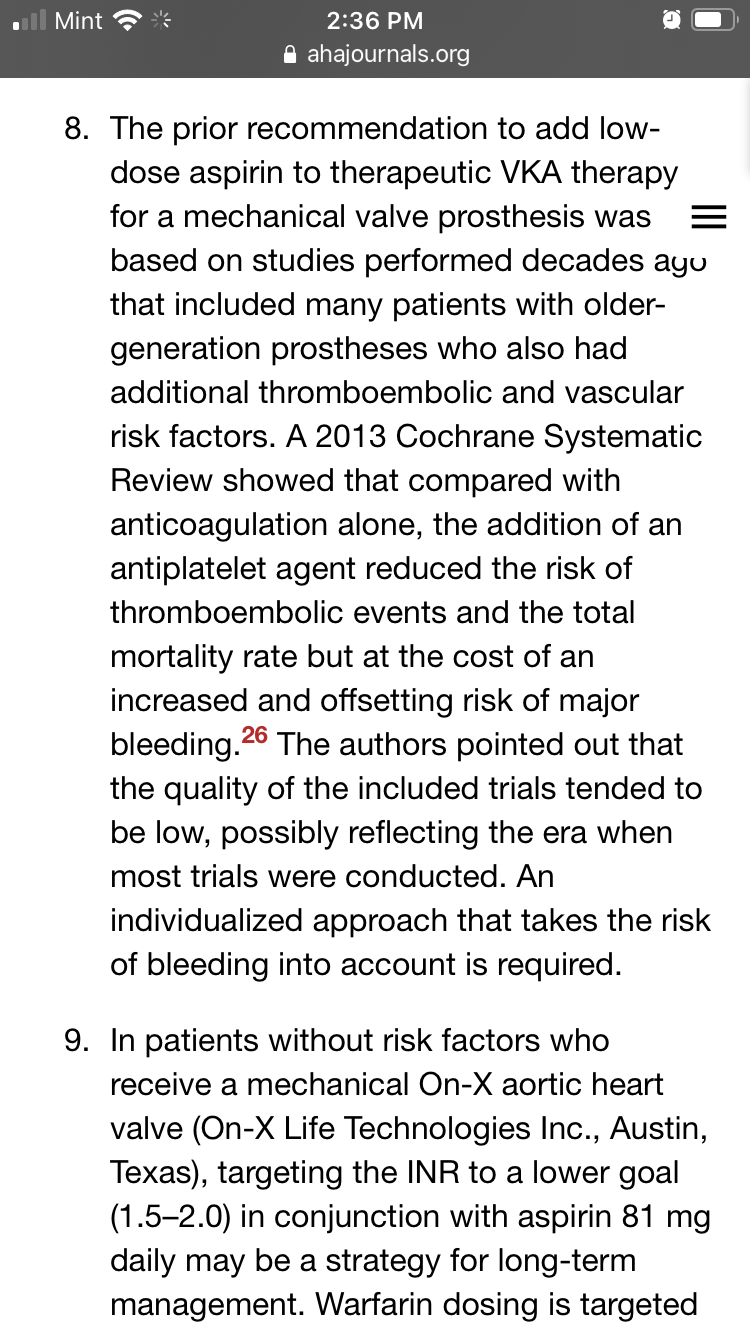 Here’s the continuation of that part in case you have an ON-X & are curious what it says. 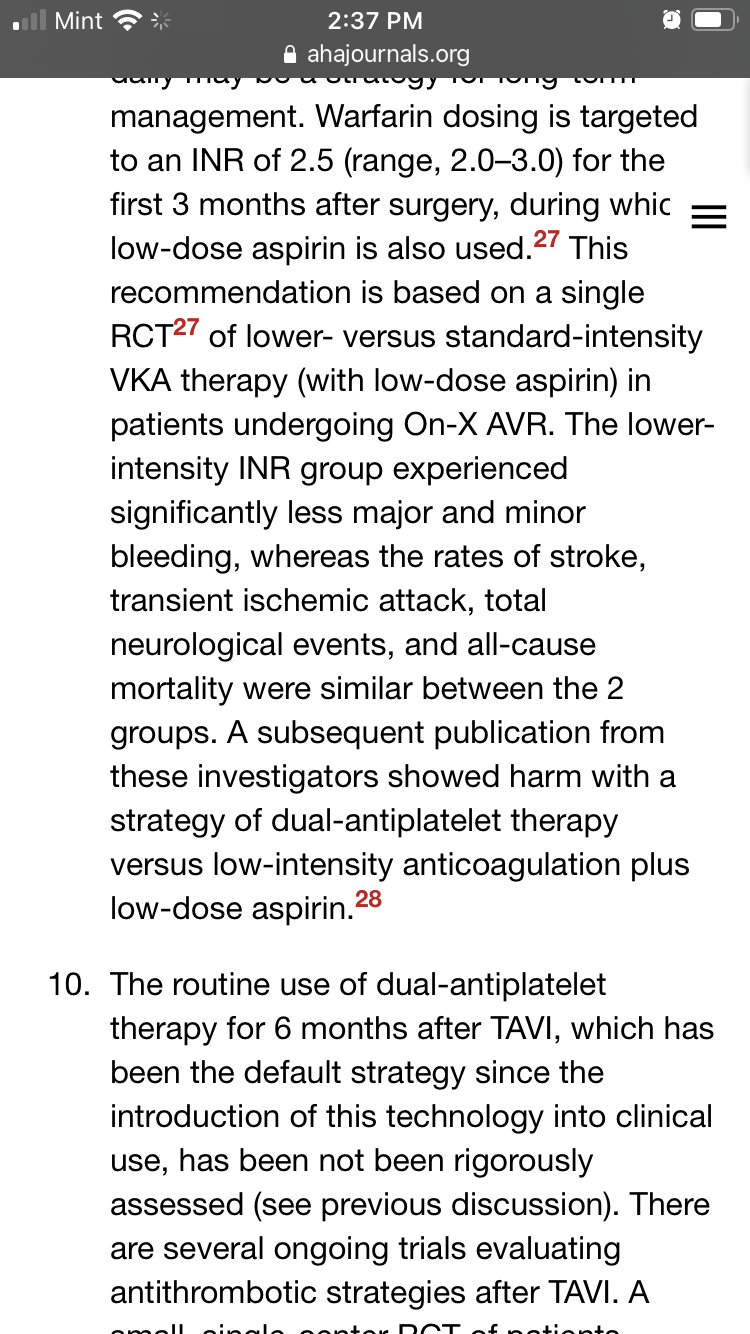 And who decided that bleeding offsets a stroke?

Mister_James said:
These are not standard tests.
Specialized tests will reveal everything but that is time.
You know they will do blood cell counts, INR, glucose, cholesterol, urea....when they take blood. They are not doing vaccine antibody tests, if they did they would find out what you are missing.
Click to expand...

ok, so what is the scenario you are envisaging? That someone has come into ER suffering trauma or that a doctor managing an INR is concerned?

Too many things come to mind, so would you clarify what situation you are thinking of because you've moved from a simple problem

Mister_James said:
The problem is very simple, warfarin effects are measured by INR. Aspirin Effects are not so when you are at say INR 2.5 doctors know how to treat you if something happens that requires them to lower your INR.
Aspirin makes their work nothing but guess work.
Click to expand...

to something else ... could you clarify this?

Also while those tests are not in the battery of standard "person goes to doctor" they are doable and your point about time taken suggests an emergency.

Amy said:
But you have a mechanical valve & are on warfarin?...
Click to expand...

Hi Amy, same here, St Jude mechanical and warfarin however I've never been on or have been prescribed Aspirin .

There seems to be a few potential negatives to Aspirin .
It's not standard protocol in the UK it's about your personal circumstances and risks.

leadville said:
There seems to be a few potential negatives to Asparin .
Click to expand...

There are and the literature is not unanimously supporting it. I call it as a case by case thing. Why do you even need to involve a doctor? In Australia it's a supermarket purchase.

pellicle said:
Why do you even need to involve a doctor?
Click to expand...

I don’t. I just need, as the title of the post makes clear, to know * why * we are often on both, so when a random doctor who, in other ways is untrustworthy, says to go off it, I can decide whether that’s really a good thing or not.
You must log in or register to reply here.
Share:
Facebook Twitter Reddit Pinterest Tumblr WhatsApp Email Link