Hard to stay a course with optimism during this year that is trying on so many fronts. On top of that, as I write this, we are socked in with what is shaping up to a week's worth of off-and-on tropical downpours. Nevertheless, let us power on and think good thoughts.

I am deriving some joy from a new fitness gadget I found on the Internet: a "Magnetic Under Desk Elliptical." Caught my attention with the declaration that it came "fully assembled." And indeed it did, tightly packed so as to keep all parts intact. Pedal-ready right out of the box. As the name suggests, you can place it under your desk and get in a little pedaling exercise while you do things like post to "Staying the Course." However, even more ideal, I find, is synching with a lift recliner like the one I purchased for recovery after my OHS last September.

The lift will take you up high so you can stand up without having to put any strain on your arms. I found the upright position the perfect angle for pedaling the portable (25-pound) elliptical. For a little upper-body work at the same time I use some stretch bands that physical therapists have gifted me over the years. Obviously this is far from a complete fitness program; however, it is a nice supplement to daily dawgwalking, and something that can be done at home when Covid-19 still makes visits to germy gyms problematic. I might still get a recumbent exercise bike, too, but this mini-elliptical doesn't hog space like an x-bike does. You can find this gadget and others like it on Amazon, if you're interested. (Let me know if you want the company's website.)

Below is a selfie of my grizzled legs grinding away on the elliptical, from an upright position in the lift recliner.

This little gizmo also has an exercise computer that gives you: speed, time, distance, and calories. And there is easy-to-use knob to adjust tension.

Hope you all are finding your own rays of sunshine in these rather gloomy times. Let us know how you are faring. 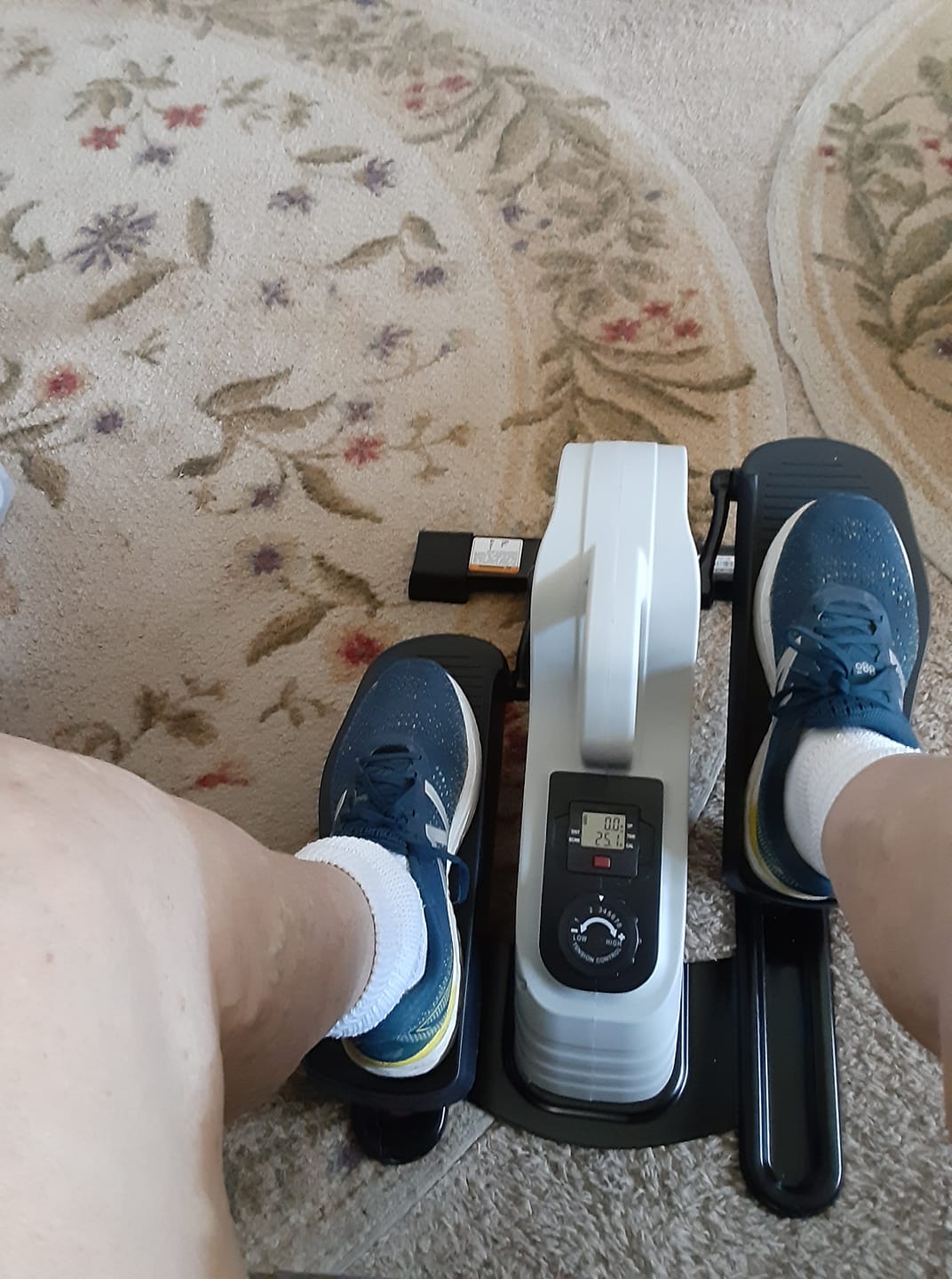 Ooh, interested in the mini elliptical! Perhaps something that will take up some hours while I'm home all the time.

I lost my job as result of the company I was working for being forced to make massive staffing cuts because of loss of revenue during the state shut down. So originally I was laid off for a couple months, then went back to work for about 6 weeks, and then they announced lay offs. So I've been trying to apply for new jobs (actually have a second interview at a promising option today!

) and get going in the work force again.

Been trying to do a lot of gardening (if anyone knows how to kill morning glory, please let me know. It's taking over my vegetables!) And I'll say I'm quite impressed with how far my little plant babies have come. Hopefully in the next month or two I'll really have some veggies to cook with. For now, I've been able to harvest all my greens, all of my herbs, and a head of broccoli...so that's been fun for me.

Mathias is doing pretty well...the clinic his cardiologist works under now offers home INR testing which is a small win for us! We've been testing at home but having to pay out of pocket, so the fact that his clinic is offering it now means insurance covers just about everything. Maybe it's a small victory that has come out of the COVID stuff, as there arent many other victories at all. Mathias is also moving up in ranks at his job which I'm very proud of him for (though, I knew all along that he has all the potential to succeed anywhere he is at) the only draw back is the added stress. I'm hoping he, and the people he works with, doesn't get overwhelmed and cause his body any distress. He's come so far, I dont want to see anything adverse happen.

Trying to think of other goings on around our neck of the woods...its been uncharacteristically cooler for July here in northern WA, which makes for excellent grilling weather. We are also starting to make moves on purchasing our first home, which is exciting and terrifying all balled into one beast.

I hope everyone had a safe (holiday) weekend!
Lots of love and light,
Jill

Life goes on in lockdown here. It's now less of a lockdown for most people but some of us staying there until 1st August and maybe then some more.

Very good on the small peddling unit, Superbob. Two friends of ours also purchased similar units and they like them. Speaking of gardens, we usually have a garden tour each year at about this time. It's a fund raiser that helps pay for community plantings and maintenance. But this year we had to cancel due to C-19. Not to be deterred I mad a short video tour of our garden anyway.

We had a good Fourth here, watched a lot of Hamilton, got outside a bunch, I found a nice clean isolated stream to cool off in. I'm desperate for a crystal clear, deep cool lake swim. I'm sure I can find a place, it's Minnesota. Just gotta investigate a bit to find a spot that is isolated.

dornole said:
We had a good Fourth here, watched a lot of Hamilton, got outside a bunch, I found a nice clean isolated stream to cool off in. I'm desperate for a crystal clear, deep cool lake swim. I'm sure I can find a place, it's Minnesota. Just gotta investigate a bit to find a spot that is isolated.
Click to expand...

Land of 10,000 lakes -- do I have that right? Sounds idyllic -- an isolated lake with crystal clear water. But (just being a nervous nellie now) you do have good swimmers around to spot you, just in case, don't you? Bet Minnesota does have some beautiful landscape. Thanks for this reminder that a swim really would be quite refreshing on a summer's day.
M

Weather turned hot this week. It is summer here.
My weight is down around 170-171, just would like it 170 or less so I'm almost there.
Still working which is good but not as much from home right now. It's interfering with my exercise. We've been watching a bunch of dogs so lots of walk opportunities.
I had 2 low INR readings but the test on Friday came in right at 2.0. I wonder if it's my weight loss and probable metabolism change. I don't eat as much and not as hungry either.
Our Gov. just shut down a bunch of businesses again. This is going to run thru the end of summer so we better get used to it.
Everyone stay healthy.
S

Just got back from vacation in the Smokies. Lots of hiking. Lots of pictures. Did some white water rafting, river tubing in class 1’s and 2’s. Really good time all around. Below are a couple snaps I took of falls we hiked to. Got the kids on a 9 mile round trip for the tall one. They did great!

Back home and looks like busy times are here. Lots to do. I need a vacation! 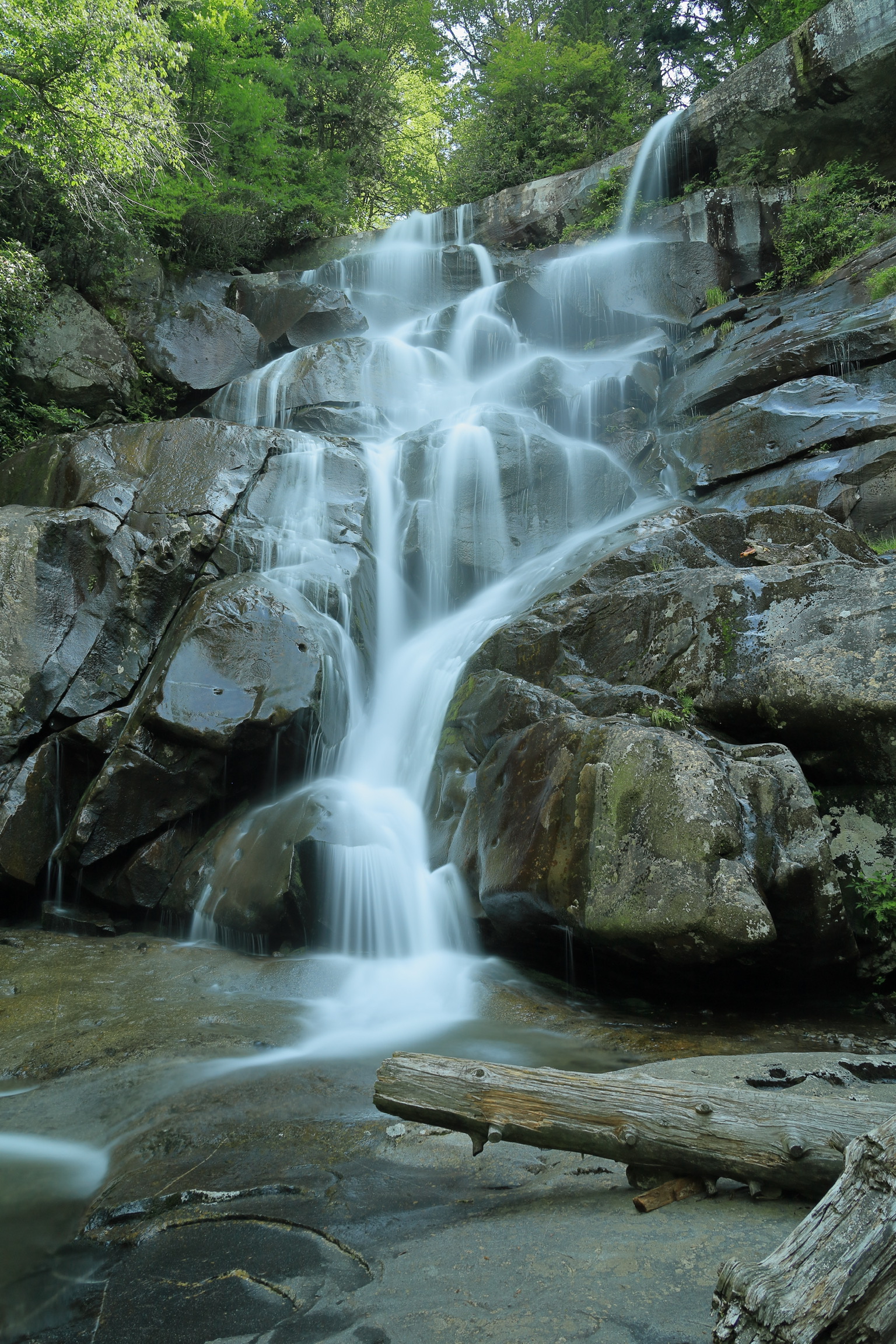