Which planks are you referring to, front or side? Importantly how long are you holding the position for? Any exercise where one holds a stationary position under load is considered isometric. The longer the position is held the greater the rise in blood pressure.

Stuart McGill a world leader in lower back / core health many years ago stopped recommending the typical 1 minute plank holds due to a number of issues which included the build up of blood pressure from memory. He recommends only short holds of around 5 - 8 seconds but performed for a number of repetitions.

I have an aneurysm which has been stable at 4.7 mm for three years now. It had been growing around 1mm per year prior to that. During this entire time I’ve done side planks everyday along with other McGill lower back / core exercises.

There’s a number of exercises equally good or better than the front plank available for the front abs. However the obliques and quadratus lumborum which supports the spine are best exercised using side bridges. The side bridge I use a lot of the time is the easier version as shown below along with the harder version. However if performed property by engaging the core (pretend about to be punched in stomach) prior to each rep it can still provide enough resistance for good conditioning. I also do a few more reps than when doing the harder version. When doing the easier version pretend you’re doing a squat lying on your side by bending the legs as you go from start to finish. Note also that I’m just over 6’ 7” (200 cm) tall so there’s a lot of load during planks due to distance between points of contact and poor leverage. Another reason I like the easier version. 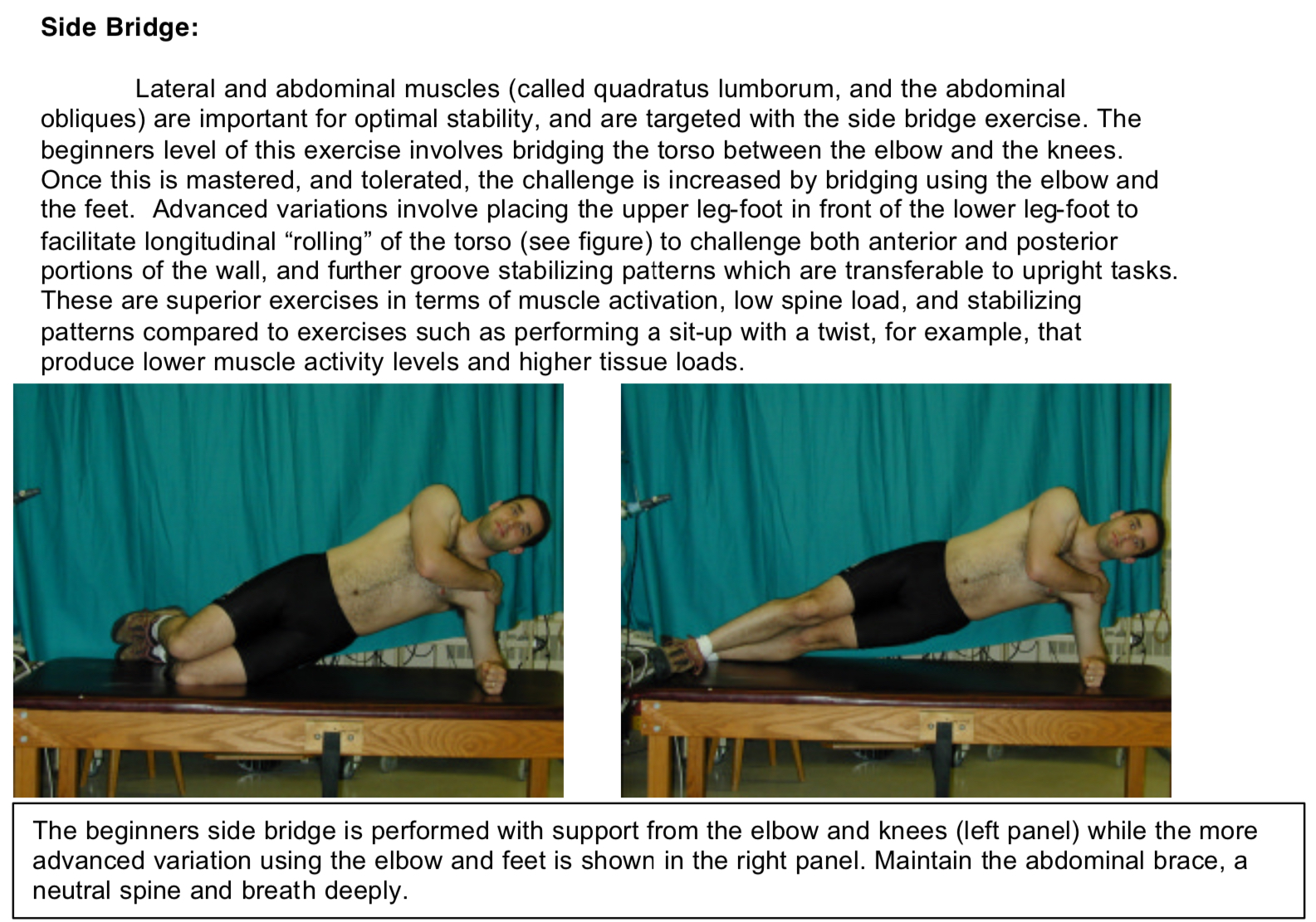 If still worried about turning the exercise into an isometric hold and impact on aneurysm then simply keep moving during reps. Then the exercise is no longer isometric but dynamic being much less hypertensive in nature.

Of course I’m not qualified to provide advice on such but simply stating what I do.
Last edited: May 22, 2019

Good info, Gordo! We did front planks, and I did the version in which you are in the push-up position. Our teacher's most frequent routine was a series of 8 planks of 20 seconds each. But sometimes we did 30 second, 45 second, or full minute planks. I do think I got too enamoured of these given all the praise I got from teacher and classmates. Anyway, I am going with walking, exercise biking, gentle stretching, and healthy eating now as my gameplan -- hoping to stabilize my aortic workings.

Gordo, thanks for that. I was talking front planks. As an alternative, my trainer showed me a front walk out over an exercise ball - gives some of the plank experience, but you ARE always moving. Much appreciated.
You must log in or register to reply here.
Share:
Facebook Twitter Reddit Pinterest Tumblr WhatsApp Email Link