2021 ESC/EACTS Guidelines for the management of valvular heart disease:

11.3.1.2 Target international normalized ratio
Target INR should be based upon prosthesis thrombogenicity and patient-related risk factors (Table 10).479 It is recommended to target a median INR value rather than a range to avoid considering extreme values in the target range as a valid target INR. High INR variability is a strong independent predictor of adverse events after valve replacement. Although some studies have supported lowering a target INR for aortic MHVs,480,481 further evaluation in larger cohorts is warranted before updating current recommendations. The use of self-monitoring INR is associated with a lower rate of VKA-related complications in all ages.482 In a trial of lower intensity warfarin plus aspirin (INR 1.5–2.0) or standard warfarin plus aspirin (INR 2.0–3.0) after implantation of the On-X MHV in the aortic position, the similar safety of the two approaches was partly attributed to use of home INR monitoring and high degree of adherence among patients.481 Patient’s education plays an important role for achieving stable anticoagulation in the therapeutic range. Effective management of patients with unstable INR requires frequent in-clinic testing and dose titration. Because of the lack of good-quality evidence, pharmacogenetic testing cannot be recommended to guide the dosing of VKAs.

Those guidelines indeed remain similar to the 2012 publication by ESC/EACTS so its timley to remind people that much of the developed world has been in this square for over 10 years now (if I was being unkind I'd suggest that exceptions to this are nations who remain adherents of an outdated, inadequate, arcane and difficult to work with system of metrics called the "Imperial System" which belonged to an Empire that they fought a war to leave)

Guidelines on the management of valvular heart disease (version 2012)


The former is determined mainly by the target INR, the quality of anticoagulation control, the concomitant use of aspirin, and the patient’s risk factors for bleeding (p31)​
​
it goes on to say:​
11.2.2.2 Target INR​
In choosing an optimum target INR, one should consider patient risk factors and the thrombogenicity of the prosthesis, as determined by reported valve thrombosis rates for that prosthesis in relation to specific INR levels (Table 20). Currently available​
randomized trials comparing different INR values cannot be used to determine target INR in all situations and varied methodologies make them unsuitable for meta-analysis.​
Certain caveats apply in selecting the optimum INR:​
† Prostheses cannot be conveniently categorized by basic design (e.g. bileaflet, tilting disc, etc.) or date of introduction for the purpose of determining thrombogenicity.​
† For many currently available prostheses—particularly newly introduced designs—there is insufficient data on valve thrombosis rates at different levels of INR, which would otherwise​
allow for categorisation. Until further data become available, they should be placed in the ‘medium thrombogenicity’ category.​
​ 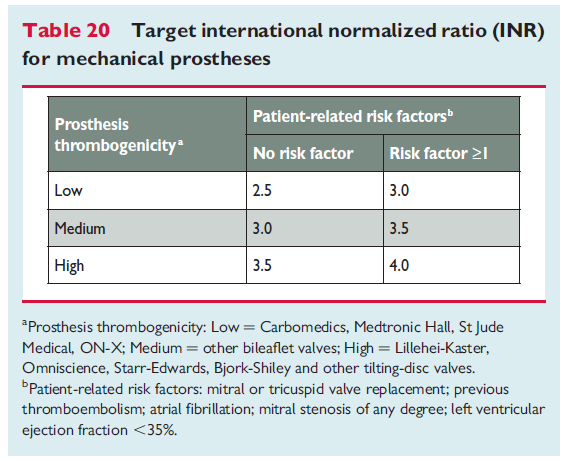 Since getting a mechanical heart valve ( in Nov 2011 ) I have naturally had to deal with life on a drug called Warfarin . This is known vari...


In the past the goal INR was given as a range, however a new way of thinking about it is emerging in the literature, which is to simply have a 'target' INR and grasp the idea that consistency of dose is good and values too high increase your problems as do values too low. You can expect your INR to move around, as long as it stays within the window there is nothing to worry about.​
​
To me the new method is wiser because for a start nothing stays in one place (least of all metabolism) and the reality is a continuum not a border. You will not suddenly burst if you go over a threshold (low or high) and so the idea of the range is a little misleading and (in my view) can encourage silly and wrong approaches: IE my Dr said my INR range was 2 ~ 3 so I'm going to sit on 2. This is dangerous because the reality is that you can't sit on 2, you'll dip low and increase your risk of a stroke.​

for the non chemists titration here means determining by analysis. AKA INR measurement. This is exactly what I bang on about here ... for those who don't need any dose adjustment, good luck to you, I wish I was like that (but then, thinking like a Stoic I would not have learned as much)


Because of the lack of good-quality evidence, pharmacogenetic testing cannot be recommended to guide the dosing of VKAs.
Click to expand...

by lack of evidence I expect they mean "we've looked real hard to find support of using this and found repeatably that it can't be relied on and thus measurement is the gold standard for getting into the therapeutic window."

Like mine is 2.5 to 3.0 due to the fact that I am on low dose aspirin and had experienced blood clot eye stroke a few years ago from many factors, including doing without warfarin for a few months in 2017 and being a type 2 diabetic. It is common and not common for some one like me to have an eye stroke, but it was my luck to have to me. But doing better for getting educated on the subject. So 2.5 to 3.0 is a normal range for me with an St. Jude's leaflet valve.
M

In choosing an optimum target INR, one should consider patient risk factors and the thrombogenicity of the prosthesis, as determined by reported valve thrombosis rates for that prosthesis in relation to specific INR levels (Table 20). Currently available
randomized trials comparing different INR values cannot be used to determine target INR in all situations and varied methodologies make them unsuitable for meta-analysis. Certain caveats apply in selecting the optimum INR:

This clearly indicates that the correct INR is a balance between the patient and the valve. "One size does not fit all." It indicates that judging a correct INR range by just one or two randomized trials is not possible, plus there is two much variability in methodologies to employ meta-analysis.

INR ranges should not be set by internet forum consensus. That's a job for a cardiologist, with experience and up-to-date.

"Me and my valve" sounds like a show tune
M

I disagree.
There is a range that reviews have shown to have lower risk of thrombosis and bleeding and that range is closer to an INR of 3 +/- 0.3.
The argument of my body and my valve and my doctor is not supported by studies.
You must log in or register to reply here.
Share:
Facebook Twitter Reddit Pinterest Tumblr WhatsApp Email Link