Failure of Onx valve and problems with lowering INR

tom in MO said:
Don't forget, the risk that these people are managing is lawsuits not just medical risk. Running a high INR and using a target number rather than range could very well be a legal-based decision not a scientific one.
Click to expand...

Protimenow said:
I think that you must have completely misread the statement that you responded to. This was NOT about INRs of 6 or 7 - it was of INRs that were .5 BELOW the target INR up to .7 ABOVE the target INR - NOT INRs between 5 and 7. This is above and below the RANGe - not absolute values.

This 'Rat Poison' thing should end here.
Click to expand...

My apologies, I was trying to be somewhat sarcastic with the rat poison comment. I did not realize there was sensitivity on the term. I now understand that some in the community are sensitive to the term.

On the range comment: I copied and pasted from the link referenced. Top of page 7. INR values below 6, but 0.7 or more above target.

I will reinforce my previous comments.
This study indicates slight reduction in daily intake of Coumadin until back in range. My caretaker promotes a more aggressive 'hold' type response to INR values that are slightly higher than target + 0.7. For instance, my target is 2.5. If I test at INR=3.3, my care team takes hold approach as 3.3>(2.5+0.7). This study would create a damped 1st order response with the slight change in dosage, while my care team uses a technique that tends to create a 2nd order response with low damping, as next test I tend to be lower (out of range), and thus need maybe 2x normal dosage...

DDT77 said:
My apologies, I was trying to be somewhat sarcastic with the rat poison comment.
Click to expand...

none needed ... it "is" rat posion ... anyone who gets angsty about it needs to get their humor gland massaged

My Finnish friends sent me this postcard after surgery 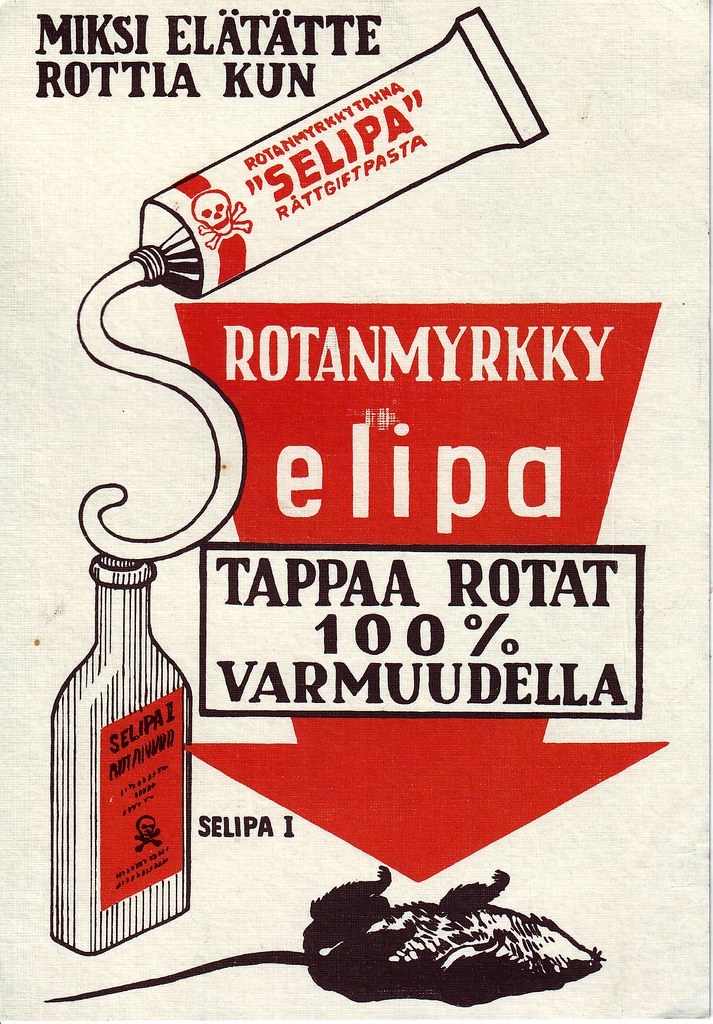 In Australia we commonly sell this one: 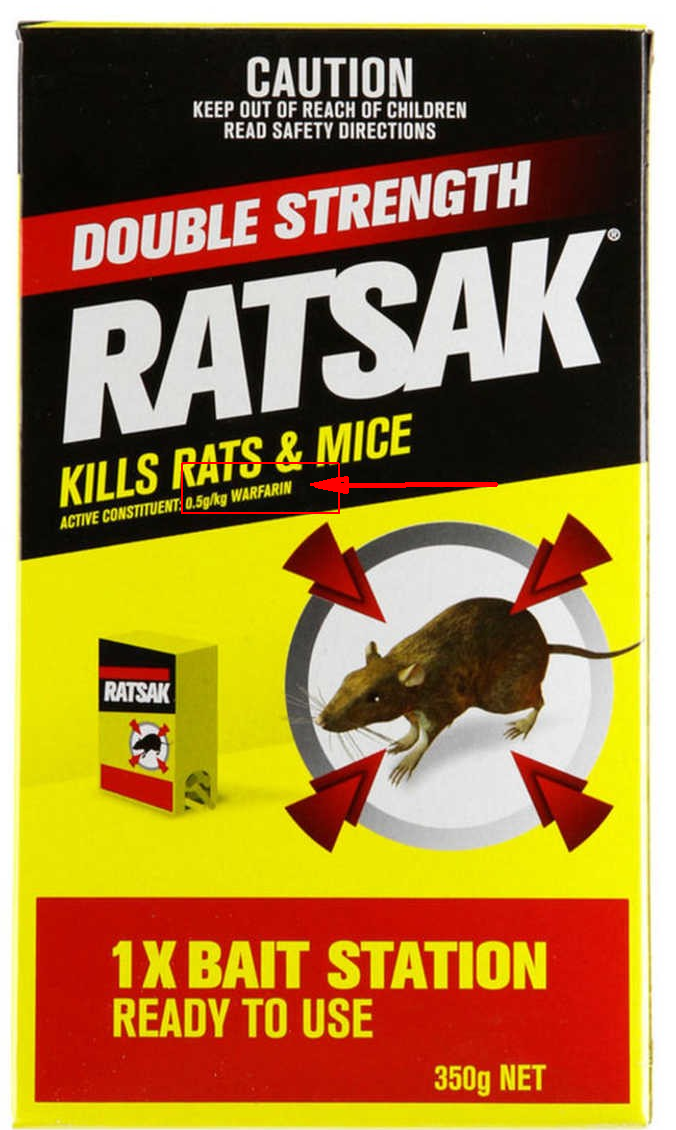 yep ... that says warfarin right there on the pack. So evidence suggests that: 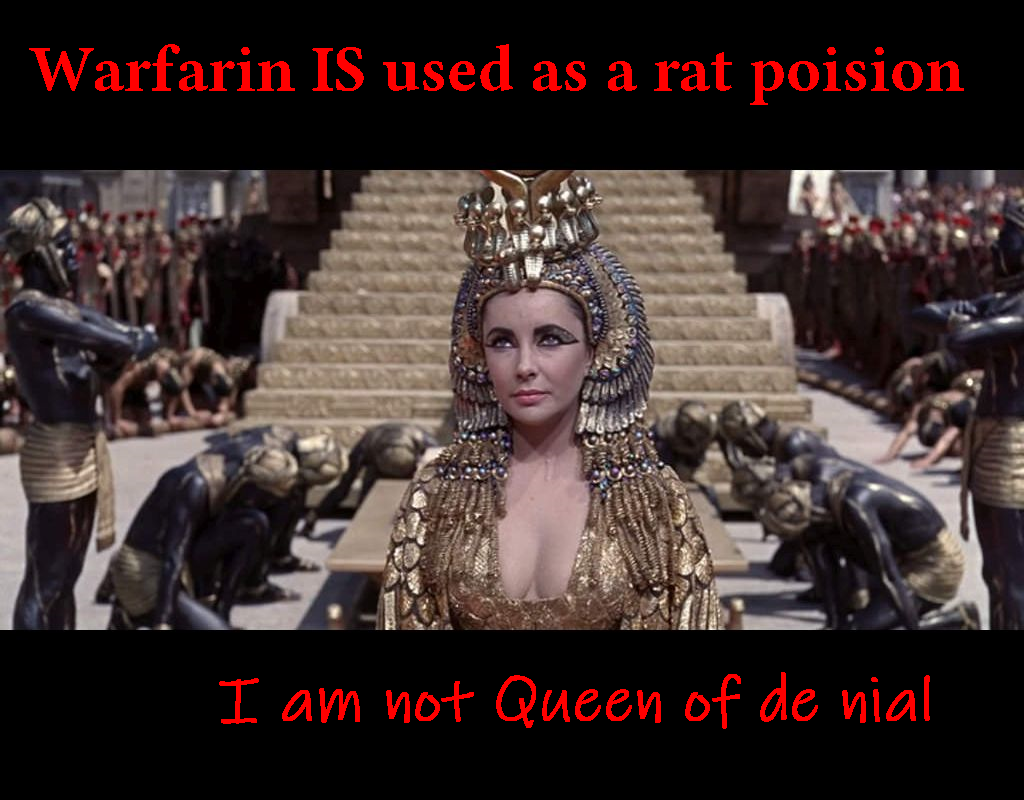 So that ratsaks 500mg per kg, so probably at best 2-4 weeks worth of doses in a box,
Not worth stocking up with for either a nuclear or zombie apocolypse... and we might be looking to eat rat kebabs by then
P

Hey, Warrick: what a great idea. Feed the right dose to the rats, then, aftter they die, you can take your daily dose by eating the rat. This solves two problems - gets rid of rats and serves as nutrition for you.

As far as lack of humor about the 'rat poison (not poision)' comment -- I've heard it too often, from too many people, to treat it as a benign topic.

People avoid warfarin because the material is used to kill rats -- they seem to exclude the possibility of a mechanical valve BECAUSE they're deathly scared of taking 'rat poison' and what it will do to them.

When a day comes when 'rat poison' isn't a reason to avoid surgery to install a device that will probably last a lifetime, I won't mind seeing the words 'rat poison.'

As with most, if not all of us, it would be nice if, someday in the future, a new, affordable, easily reversible anticoagulant that doesn't require INR testing comes along.

The heavily advertised anticoagulants that many people with AFib are taking (I've heard that these cost up to $8 a dose) was probably also intended for patients with mechanical valves - but testing probably didn't provide data demonstrating its safety or positive results in people with mechanical valves. I'm pretty sure that these weren't developed only for treating AFib or deep vein thrombosis.

For me, even if an oral anticoagulant that would make weekly testing no longer necessary comes along, it may still take some convincing to get me to give up the easily manageable, easily reversed, extremely inexpensive warfarin. (Come to think of it, maybe this argument makes it difficult for drug companies to justify the costs of developing and testing a more expensive alternative to warfarin).

Protimenow said:
As far as lack of humor about the 'rat poison (not poision)' comment -- I've heard it too often, from too many people, to treat it as a benign topic.
Click to expand...

I don't see you changing the world by berating all of us in here mate. Roll with the punches, bend like the reed in the wind ... But good luck finding peace or happiness by getting agro at the world and championing a lost cause.

King Canute and the tide - Wikipedia

Warrick said:
So that ratsaks 500mg per kg, so probably at best 2-4 weeks worth of doses in a box,
Click to expand...

5hit, I'd never thought of looking at the dose ... this makes me think that some of my 1mg tablets and a bit of Deb (instant mashed potato) could make a "killer" concoction for the rats (who are unable to puke, so when they eat stuff are stuck with what happens ;-)

I didn't think that I was berating anyone -- just pointing out my personal issues with the 'rat poison' comment.

For the last 40 years, my life has been about words - and after my TIA, words - and usage - have somehow become even more important.

SO - forgive me if it feels like I was berating someone for using that term.

And, I guess it's an Australian term, but what is 'getting agro with the world'?

The gravitational center of the earth is an entirely different thing - and, to me, can't be confused with a thing's center of gravity.

I'm not entirely sure what center of mass means -- it sounds to me as if this is something WITHIN the item, rather than a force that occurs outside of the item. Take that same motorcycle, I would guess that, because there's probably more metal in the engine than in the frame, the center of mass for that motorcycle would be somewhere around, or inside of, the engine, while the center of gravity would be, one would hope, a few feet UNDER the bike.

Hey, administrator - this isn't politics; it's off the original subject of this thread; and it's been friendly all the way through.

Perhaps Nobog and I will discuss this further, before you close this thread.
Last edited: Nov 10, 2019

Hey protimenow its all good - its how we learn

but coming from an engineering background:

This has nothing to do with gravity. Sorry for deviating from the original thread.

You are both mistaken. I'm the centre of gravity.

Damn. I thought you were the center of the universe.
P

nobog said:
Hey protimenow its all good - its how we learn

but coming from an engineering background:

This has nothing to do with gravity. Sorry for deviating from the original thread.
Click to expand...

I understand your definition of center of mass. But, when they say center of gravity, they're referring to a spot, usually below the object, where the gravitational forces focus. Take, for example, a bicycle -- it may be accidental, but it's designed so that the center of gravity is at a point that is slightly below the wheels. Put a person on the bike, and there's more weight below the person's trunk than there is on the top half of the body - the center of gravity becomes a point a foot or two BELOW the wheels - and this gives the bike its stability. Objects with a low center of gravity are more stable than objects having a center or gravity that's above the 'ground.' More weight at the bottom than at the top keeps things from tipping over (that's why I wear heavy shoes).

Center of mass is a different thing.

And, as we all know, Agian is either the center (or centre) of gravity - or, perhaps, the center of the universe.

Protimenow said:
the center of gravity becomes a point a foot or two BELOW the wheels - and this gives the bike its stability.
Click to expand...

ahh ... so this explains why a bicycle can't fall over (not gyrostability) ... the things I learn hear
P

Well, yeah, gyrostability. Perhaps I was thinking of tightwire walkers - with the really wide poles that shift the center of gravity far below the poor soul's feet. I knew that riding the bike made it much more stable - but didn't get to gyrostability. My High School Physics only went so far...

Protimenow said:
Perhaps I was thinking of tightwire walkers - with the really wide poles that shift the center of gravity far below the poor soul's feet.
Click to expand... 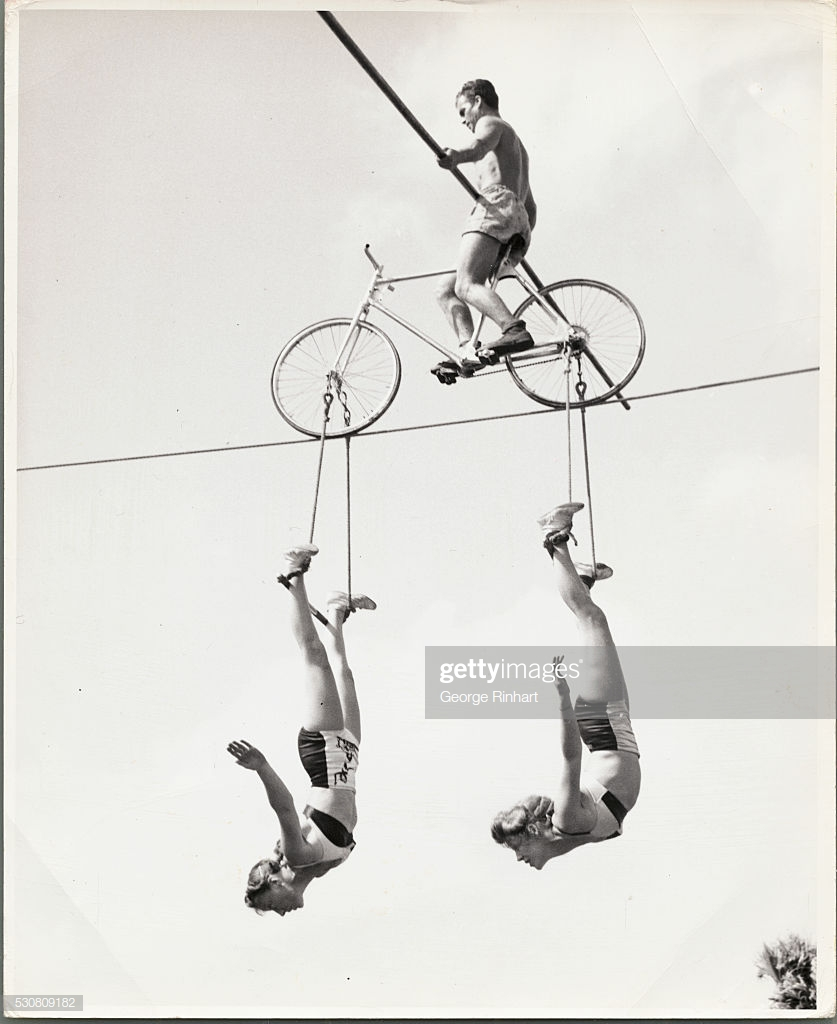