Eliquis instead of Coumadin

I think this deserves a quick primer:


Warfarin exhibits its anticoagulation effects via the intrinsic and extrinsic pathways in the clotting cascade. This activity occurs through effects on vitamin K-dependent clotting factors (II, VII, IX, and X) and the anticoagulant proteins C and S.​
(ref)
So lets look at a diagram of this (yes, its complex and shows how the large molecules involved transform after essentially triggering reactions, biochemistry is such a complex subject BTW). 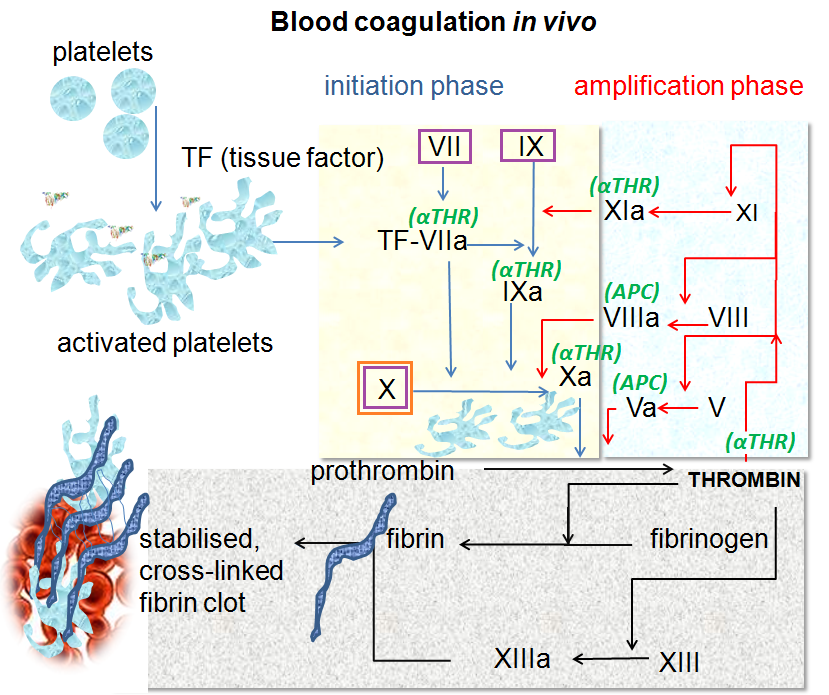 Warfarin acts on the purple squares (as well as one not directly involved, and I suspect is a precursor stage) while apixaban only acts on the orange square.

So there is quite a lot happening which apixaban isn't touching.

I'm suspicious that the exact mechanisms involved in thrombus generated within the stream of blood triggered by pressure (measured in dynes) is not something which is covered by direct factor X inhibition.

Thanks for info. So far so good being on Eliquis. I hope the three doctors I see know what they are doing. They seem to be moving most of their patients to Eliquis.

cp172 said:
They seem to be moving most of their patients to Eliquis.
Click to expand...

firstly, thanks for being part of that trial. Yes they are moving more patients in that direction and to be honest I think that for many patients that direction is probably for the better.

Why? Well (setting aside for now if its actually demonstrably safe for mech valvers) for a start you don't need to manage it (not that you can) and while many warfarin takers don't manage theirs the stats are clear: (again setting aside valvers) the outcomes for Apixaban are no worse that (badly) managed) warfarin, and probably better than unmanaged.

Not everyone is like me (or my Gang) and wants to test, wants to have a say in how its managed. So there will always be a need for an alternative that's safer for people who don't want to.

Now, if the prices came down it may get boarder acceptance than it is.
C

It’s interesting, I just had a patient request to go off of Eliquis for the expense and the bid dosing. He doesn’t take it for a valve but for a-fib. He was given permission to switch by his cardiologist on the advice that I manage his INR. Takes a small amount of Coumadin once a day with no worries and saves 600 bucks a month. Win , win……

Critter said:
by his cardiologist on the advice that I manage his INR
Click to expand...

surely this must be wrong ... because its well established that "none of us here are Doctors or experts"

I feel like having a conversation about methods, but will resist. Reach out if you want.

Ok, Coumadin obviously is helping a countless number of patients throughout the world. It is, however, a 60 year old drug with a monitoring network of people. (makes me wonder) I wish all good health and a Happy ,Blessed Thanksgiving.

Patrick2018 said:
however, a 60 year old drug with a monitoring network of people
Click to expand...

Aspirin is how old now? And electricity? Surgery itself is quite an ancient art...
Pathology labs don't exist soley for monitoring INR, although low cost hand held units do.
The success of society depends upon teams.

Personally I'm more comfortable with a drug that is backed by 60 years of use than a novel one about which we know only what the drug company tells us. (looking at Pfizer)
Last edited: Nov 17, 2022
D

As a senior, I watch a lot of news programming on TV. I see commercials several times a week for these new, and novel anti-coagulation drugs like Eliquis and Watchman. Please note that the ads all run a disclaimer at the bottom of the ad warning that those drugs are not for patients with "artificial valves" (note that this disclaimer does not differentiate between mechanical or tissue valves).......and that disclaimer is to protect the manufacturer against lawsuits for misuse........so, proceed with caution if you use these drugs "off label" regardless of what your doctor says.
Last edited: Nov 18, 2022
O

Speaking of prices, those of you on Warfarin are you all factoring in weekly lab costs? Or is self-managing INR able to bypass lab work?

One other concern that is growing if you follow news is what will you do if there is a supply disruption of any medications you depend on? They all have limited shelf life. Stocking up for the long haul has limitations as well.

We know that Eliquis is not good for mechanical valves. In the drug trials primarily run by the drug companies Eliquis was shown to be as good or better than warfarin in A. Fib in terms of embolic phenomenon and bleeding. These trials compared Eliquis to warfarin for basically all comers. You can bet that the trials did not try to maximize the control of warfarin via home testing. Phrases like usual and customary are often applied to the warfarin management or mismanagement. I would love to see a study comparing these novel anticoagulant drugs against warfarin in patients who have excellent warfarin management.
Physicians sometimes get their information from the drug reps that come to their office or see the headline of a medical report. They are often too busy or not interested in the nitty gritty of the studies. So they parrot what they are told. I see this in my field all the time. When a drug costs over ten times or more over another drug you can be sure that money plays a large part in the equation in promoting the expensive drug.
As you can probably note I am a bit skeptical of the drug industry having dealt with it for many years. For now, those of us who have mechanical valves don't have to worry about making a choice.
Last edited: Nov 19, 2022

vitdoc said:
I see this in my field all the time.
Click to expand...

Preposterous. Nobody here is a doctor. Doctors are mythical gods that live in their own bubble. They only have their patients best interest at heart. They always thoroughly read the latest medical research and evaluate its applicability to their existing patients. They only recommend what is best for each and every individual case.

Superman said:
Nobody here is a doctor
Click to expand...

or even knows anyone who knows a doctor.

As an aside I wonder if this phenomenon is a subset of Dunning and Krugers publication but restated as: "I knew absolutely nothing and researched in a maniacal frenzy and so everyone must have been like that"

Personally I'm putting that as an intersection set: 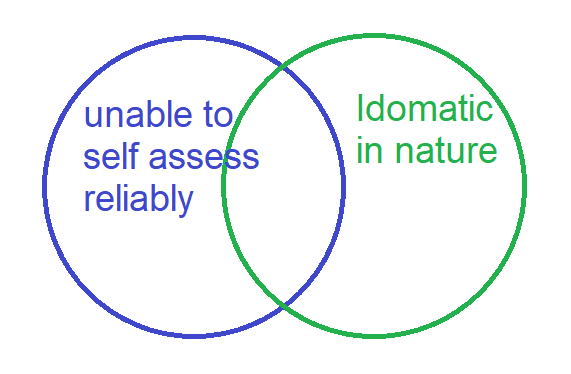 oo0My_Valve0oo said:
Speaking of prices, those of you on Warfarin are you all factoring in weekly lab costs? Or is self-managing INR able to bypass lab work?

One other concern that is growing if you follow news is what will you do if there is a supply disruption of any medications you depend on? They all have limited shelf life. Stocking up for the long haul has limitations as well.
Click to expand...

Warfarin is cheap (<$10/month). Home testing is about $8 a pop and needs to be done every 2-4 weeks depending upon how stable you are.